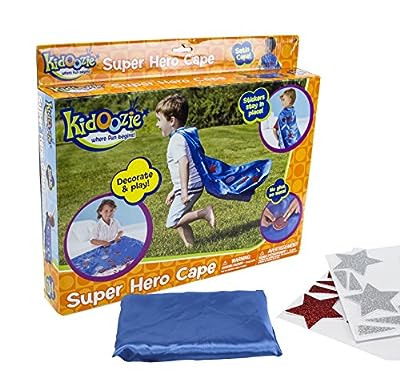 Price: $19.99 $18.85
As of 2021-11-16 00:56:53 UTC (more info)
Product prices and availability are accurate as of 2021-11-16 00:56:53 UTC and are subject to change. Any price and availability information displayed on https://www.amazon.com/ at the time of purchase will apply to the purchase of this product.
You Save: $1.14 (6%)
Buy Now from Amazon
In Stock.
Product Information (more info)
CERTAIN CONTENT THAT APPEARS ON THIS SITE COMES FROM AMAZON SERVICES LLC. THIS CONTENT IS PROVIDED 'AS IS' AND IS SUBJECT TO CHANGE OR REMOVAL AT ANY TIME.

Super heroes have become all the rage these days. Comic books have always been popular amongst kids of all ages and genders, of course. But over the past several years, Marvel has been making huge waves with their various super hero movies. Not only that, but even the DC movies have been fairly popular. And whenever anything is popular, children want to emulate it. Of course, when children want to emulate something, the difficulty becomes making sure that they're going to emulate it safely.You can't always keep a kid from doing dangerous things, but you can at least make sure that the toys they use to do them are safe. That's why you should buy your child the Kidoozie super hero cape!Children have always tried to pretend that they were super heroes. In times past, they would simply tie a blanket or a towel around their neck, and use that as a cape. But that could wind up being somewhat dangerous, because the towel or the blanket might have been too long, and gotten caught up in between the children's feet. Not only that, but it could also wind up pulling on the child's neck, causing a choking hazard.These are things that the Kidoozie super hero cape was specifically designed to help avoid. The super hero cape is specifically designed with velcro straps that wrap around the neck. This means that the strings are made in order to fit comfortably around the child's neck, without having to be too tight and thus cause a choking hazard. The fact that the straps are held together with velcro means that they come apart that much easier, so that if something pulls or tugs on the cape, there's no worry of causing damage to the throat.The cape is also made out of a sturdy, hypoallergenic fabric that will hold up against even the most vigorous play style. Children will often play hard, after all, and many children are rough on their toys. Kidoozie understands that, and so they make sure that their toys are going to hold up no matter how rough the child is. Their super hero cape is no different. No matter what kinds of things they get in to, their cape will hold up!The cape is also easy to clean, meaning you won't have to worry about what kinds of mud, dirt, and other substances your child decides to play in. Kidoozie understands how dirty children can be, after all, and they know how difficult it is to clean up after them. So they made sure it was easy for you to do so!If your child is absolutely in love with super heroes and heroines, you can safely allow them to live out their imaginative fantasies. Buying them a super hero cape will allow them to be the kind of hero that they are in their wildest dreams, and let you have peace of mind about their safety.

Details: Not every beach has the right sand for a DIY sandcastle and not everyone wants to spend time making one. Kidoozie makes fun in the sun easy with the Castle Sand Pit toy. No more hassle building a castle, just lock together and you’re done! Once full assembled, the Castle Sand Pit measures 34 inches in diameter, giving your child their very own play place in the sand. They can fill it with water, dig a hole, or rule a whole kingdom of hermit crabs. They are the ruler of this castle. We know how hard to can be to lug all your beach supplies across the sand, so the Castle Sand Pit is transportation friendly. Just like how the pieces snap together on the beach, when you’re finished they fit together vertically too, both simple and space saving. Kidoozie toys are engaging, educational and FUN. Our broad range of high-quality toys have won numerous awards and are safe and well designed. Innovative toys encourage movement, problem solving and pretend play through various themes. Stimulate the imagination and enable learning through play. Package contains (1) Kidoozie Castle Sand Pit Toy. Includes 8 snap together castle pieces, shovel, and rake tools. Measures 34” in diameter when completed. Easily snaps together. Recommended for children ages 2 years and up.

There are no customer reviews yet. Be the first to Write a Review!

Cookies help us deliver our services. By using our services, you agree to our use of cookies. Learn More Accept